A nd so the story ends. Or rather, begins again, with a faint voice asking “Isn’t this where..” Those fans who like resolute endings cast about for one, turning to Pink Floyd’s follow-up album (the last one recorded with Roger Waters at the helm), the Final Cut, finding (or perhaps forcing) remarkable similarities between Pink and the narrator of many of the latter album’s songs. Some go so far as to tout it as a loose sequel to the Wall, one that gives possible hints about Pink’s fate after the last of his bricks fell. Regardless of whether one finds echoes of Pink in other albums, the Wall itself concludes inconclusively. That is to say, it circles back on itself, ending where it started. Like Samuel Taylor Coleridge’s Mariner’s compulsive need to tell his tale to anyone who will listen, the album cycles back to the beginning for a retelling to another audience; and like the wedding guest to whom the Mariner related his story, we are left “a sadder and a wiser man.” Through the imaginative storytelling and a metaphor that translates equally well to both the microcosm of the individual and the macrocosm of society, we are certainly wiser to what Waters’ sees as the detrimental, soul-robbing effects of personal and social isolationism; though still, sadder all the same to the notion that even after the collapse of one wall, another is built and the cycle repeats.

Yet in the end, Pink’s story becomes less about a singular rock star and more about us, the audience, and the world we live in. Similarly, the characters in Pink’s story are just as universal as its protagonist. While they are never given names throughout the entire album, their roles in Pink’s life define their personalities as Mother, Father, Teacher, and Spouse, possibly mirroring those very same characters in our lives. These could very well be our Mothers, Fathers, Teachers, and Loved ones. Accordingly, Pink’s story could be our own. In a sense, Pink’s story IS our own. Though the details are no doubt different, the underlying themes of humanity and its subsequent degradation as a result of personal and societal disconnection are universal. These themes apply to our lives and our world just as much as they apply to Pink’s fictional (yet just as authentic) story. Just like the “bleeding heats” in “Outside the Wall,” Pink Floyd has taken it upon themselves to convey this timeless story of personal decay, perhaps in the hopes that these omnipresent patterns, these cycles of violence, might be averted. Such is the ultimate aim of art: to illuminate, to edify. Pink’s story is finished. He constructed his wall, fell into moral decay because of it, and ultimately destroyed this isolating barrier. Our story, however, is still taking place. What happens to Pink soon becomes nowhere near as important as what happens to us. How do we live our lives? Are we currently constructing or tearing down those hindrances that produce disconnection and degeneration? How do our personal walls contribute to those of our nation, our world? How much of the world’s ills are we really responsible for? Most importantly, which versions of Pink will we choose to be?
As for Roger Waters, the man whose autobiographical blood and bones prop up the flesh of the character Pink, the story is similarly unending. Leading up to his 2010 – 2011 world tour with the Wall 30 years after the album’s original tour, Waters spoke of his own wall to Rolling Stone magazine, saying “It comes down brick by brick. That’s what growing up is. I would suggest [growing up is] a dismantling of our wall, brick by brick, and discovering that when we let our defenses down, we become more lovable. I’m not saying I’ve discarded my wall or walls entirely,” he concludes. “But over the years, I’ve allowed more of it to crumble – and opened myself to the possibility of love.”

Both Pink and Waters, it would seem, finally found their way home.

What Other Floydians Have Said

"I realize the wall is a metaphorical mental barrier used to relay Pink's story to us,but I always liked to believe due to Roger's sometimes unrealized sense of humor (shown later on Pros and Cons and Amused to Death) that, on a lighter note, it also meant in a parallel sense that all the events (bricks) in the story were the catalysts in the creation of the musical piece that is The Wall. In other words, "All in all you were all just bricks in (the album known as Pink Floyd's The Wall. His father's death, his mother, Syd, divorce, the band, life in general - all contributed to Roger eventually composing The Wall. Pink's sentencing in `The Trial' that he be exposed before his peers is what brought me to this idea. Writing The Wall for us to listen to is how Roger tore down his wall and finally opened himself up to examination rather than someone like Syd (see: Wish You Were Here). Also, there's a line in the song `The Final Cut' that says '...and if I show you my Dark side,will you still hold me tonight?' which may be using not only Dark Side of the Moon, but any of his musical expressions including The Wall (not wanting to link the Final Cut with The Wall, so instead using the next most popular Floyd title) to ask the unseen person how they will react to him exposing his ideas and feelings in a musical statement. As you had pointed out with the secret backwards message, Roger is always aware that he is a storyteller telling a story, not the character (mostly) in the story." - Steve Radzierez

"The Wall is almost, song for song, a description of the development and completion of schizoid personality disorder. The 'true self' of a schizoid is locked deep inside his mind away from his awareness, and what he sees as 'him' is in his mind behind a wall that separates him from the world. Schizoids are mostly emotionless, and what they do feel is weak and fleeting. 'Secret' schizoids (what Pink is) wear a mask in front of people. The most typical parents of a schizoid are an absent father (in this case literally) and an intrusive overbearing mother. Pink's dictator (omnipotent) fantasy is very common with the disorder. Pink ends up on trial in his mind in exactly the same way schizoids are - there is what's called an attacking self that suppresses the true self (feelings) and constantly mocks it for being weak and needy. Pinks greatest fear, being exposed in the world, is the same as a schizoid's." - sjcaylor

"You ever notice that Pink never wears his wedding ring? Half the movie is a close up of his left hand but the ring is never there." - Cole

"I've been a big fan of your site for a couple years now, but finally this year, I was able to incorporate it into one of my school essays. The topic was one that I made up, comparing Orwell's 1984 and Pink Floyd's the Wall. I just wanted to thank you because, although I used several sources, your site helped me the most." Click here to read Jaime's finished essay. - Jaime

"I enjoyed your analysis of The Wall. I'd always seen the guitar pun in 'One of My Turns' in the line 'my favourite axe,' and I feel that this particular song needs to be heard in conjunction with the earlier Floyd classic 'Careful with that Axe, Eugene'. Indeed, there are a lot of earlier clues to the direction Waters would take in The Wall. 'When The Tigers Broke Free' is very reminiscent of 'Free Four' from Obscured By Clouds - a scandalously overlooked album. Many of the themes in 'Free Four' find more detailed expression in The Wall as a whole. Lyrical / thematic snippets that are repeated in The Wall might include: 'You are the Angel of Death, And I am the Dead Man's Son.. He was Buried like a mole in a foxhole, And everyone's still on the run.' and 'Who calls the tune in the Courtroom, and who beats the Funeral drum..?'. The relevance of Atom Heart Mother is also obvious. The bitterness of Waters is also apparent in 'Us and Them' from Dark Side of the Moon. In many ways, The Wall was an inevitable happening for Waters. This album was itself a wall he was heading for all along. Little coincidence the band exploded in the collision.

"From the excellent album Animals the song 'Dogs' is stuffed full of Wall-like themes, including the lyric: 'And as the fear grows, the bad blood slows and turns to stone. And it's too late to loose the weight you used to need to throw around. So have a good drown, as you go down, all alone dragged down by the stone.' Compare with 'Hey You': 'Hey you, with you ear against the wall waiting for someone to call out, would you touch me? Hey you, would you help me to carry the stone? Open your heart, I'm coming home.' The same themes of isolation are present and the same imagery of 'the Stone'. And we all know what Walls are made of.. :-) Note, too, the drowning idea. Mirrored in 'The Thin Ice' and the swimming pool scene in the film." - Jonathan Hill

Author's Addendum: Speaking of Wall parallels with earlier Floyd works, Waters has stated that the main guitar theme that's repeated often through the album evolved from the bass line from "Set the Controls for the Heart of the Sun" off of Pink Floyd's second album, A Saucerful of Secrets.

"i have a distinct memeory of the conception of the wall...i believe that many people world wide were were somehow 'tuning in'to these same feelings of isolation...(1979) i awoke at 2 am in the us with sketches to be what i thought then painting trilogy - titled the "isolation (the education of society)...in the end, was a large hand streched canvas 36"x52" acrylic painting theat ened up being titled 'floydian slips' (in the pink)." - Pat Harris 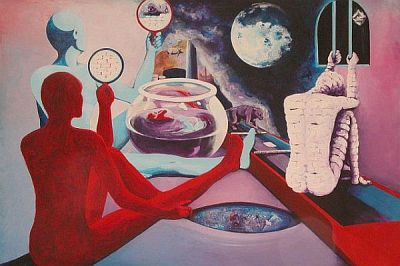